Quick, whats the first thing you think about when you hear the word candy? Is it M&M’s? Skittles? Those delicious jelly orange slices? Well, if you said Candy crush, then a) you are clearly addicted to the game and b) you are have more in common with the game’s developers than you may think. 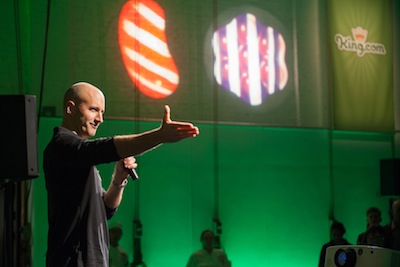 King, the creators and developers of 2013’s top grossing app, have been approved for trademark rights over the word “candy” by the European Union. It has also been reported that a similar trademark has been applied for in the U.S. as well.

A spokesman for King issued the following statement regarding the commonly used word:

“We have trademarked the word ‘Candy’ in the EU, as our IP is constantly being infringed and we have to enforce our rights and to protect our players from confusion. We don’t enforce against all uses of ‘Candy’ – some are legitimate and of course, we would not ask App developers who use the term legitimately to stop doing so.” (Via IGN)

Despite the claims in their statement, Apple has already began to lay down the lollipop hammer on some lesser known apps and games. One of the games to already feel King’s heat is “All Candy Casino Slots – Jewel Craze Connect: Big Blast Mania Land”, who’s developers have since backed down and changed their name to “All Sweets Casino Slots.”

When asked about the the “Casino Slots” name change, the King spokesman declared that the rival game infringed on their rights and were using keywords to enhance their reach in the search rankings.

What’s also noteworthy about the trademark is that it will also apply to clothes and footwear, and not just computer games. This means we could be hearing about some rather interesting cease and desist letters from the mobile gaming giants.

And if you thought King were done throwing down, then think again. The developers have also trademarked the word “Saga” to stop Stoic Studio’s from using the term in their new game, “The Banner Saga”, claiming infringement and the fact it may confuse gamers.

“This is an important issue for King because we already have a series of games where ‘Saga’ is key to the brand which our players associate with a King game;Candy Crush Saga, Bubble Witch Saga, Pet Rescue Saga, Farm Heroes Saga and so on. All of these titles have already faced substantive trademark and copyright issues with clones.” (Via IGN)

So what do you think? Are King just protecting their golden goose or are they just acting like a bunch of sweet-toothed tyrants? Let us know!