Is “Candy Crush” Stock a Lost Cause?

It’s been exactly a week since King Digital Entertainment debuted on the New York Stock Exchange. On its first day, you might recall, the much-ballyhooed Candy Crush stock took a major beating, closing after a loss of over 15% from $22.50. We figured that even though things looked grim, we shouldn’t judge King’s success until they’d had some time to bounce back. Unfortunately, it looks like that bounce might never come.

In the days after its debut, KING plunged even further, reaching a low of $17.62 on Friday, March 28th before beginning a slow resurgence. Monday saw the stock fluctuate but gain no ground, but investors’ hearts lept into their throats on Tuesday, April 1st, as KING began to climb throughout the day. By the close of the day, the stock was within 25 cents of breaking $20 for the first time since its debut. But today, King stock flagged yet again, closing at $19.25. Here’s the full graph over the past week, as provided by Google Finance. 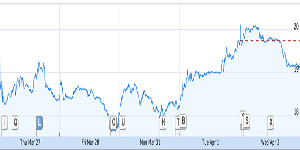 While it’s still certainly possible for King to make a big comeback by the end of the week, market pros aren’t betting on it. In fact, they’re doing the exact opposite. USA Today’s Markets Blog notes that investors are already selling King stock short–that is, they’re betting it will lose money in the short term in order to make money themselves. According to market tracking data firm SunGard Astec Analytics, 3% of all King stock traded is being “shorted.” When you consider that investors have to borrow the shares from other people and then sell the shares themselves, it seems that these folks must be pretty sure that King will continue to lose money.

It’s not a big surprise that they’re pessimistic, though. King’s IPO was the worst debut all year–and in a market filled to brimming with 72 IPOs in the first quarter of 2014 alone, that’s saying something. One analyst says he sees signs that Candy Crush is already starting to crumble, and that King will be a dinosaur by 2016. With this sort of outlook, we can’t see any reason to invest in King, even if you keep enjoying their games.