Everyone in America thought that Canadians were all pleasant, law-abiding people who got along with their neighbors. (Well, all of them except for Rob Ford, that is.) But a 51 year old man in Saskatoon has turned that stereotype upside-down after he shot and killed his neighbor’s dog. What’s more, the judge at his trial ruled that Candy Crush was at least partly to blame for Eugene Krawchuk’s overreaction. If this seems like a stretch, we have to sympathize–but wait until you’ve heard the whole story.

It seems that Krawchuk had been having an ongoing dispute with his neighbors, the Price family, for quite some time. Tensions flared after the Prices brought home a St. Bernard puppy named Bentley. Krawchuck testified during his trial that in April 2013, he was out on his property when he discovered Bentley attacking his livestock. Therefore, the defense claimed, Krawchuk justifiably shot and killed the “vicious” animal, despite teenage Lianne Price’s attempts to stop him. 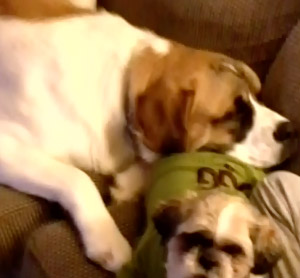 But after the full story came out in court, the judge found several reasons to doubt Krawchuk’s word. In addition to the existing bad blood between him and the Price family, it was also reported that Bentley’s trespassing may have interrupted a game of Candy Crush Krawchuk was playing. Moreover, Krawchuk was found to have loaded his rifle before seeing Bentley on his property, meaning he was acting with intent to kill the dog regardless. Even worse, the Prices reported that Krawchuk tracked Bentley with his gun as the dog ran in front of Lianne, so that the young girl was actually in his sights.

After deliberation, the judge stated he did not believe Krawchuk’s claim that Bentley was chasing his animals. Krawchuk was found guilty of shooting a dog without a lawful excuse and of possessing a firearm without a proper license. He escaped a greater charge of careless use of a firearm, to the Price family’s disappointment. Nevertheless, the family told CTV that they were satisfied with the trial’s outcome.

Would you grab a gun if some mutt interrupted your game of Candy Crush? We don’t think Candy Crush was at fault here, but it certainly seems like an interrupted level could have been the final straw. We get annoyed enough when someone we actually like disturbs our crushing time. Let us know what you think of this case in the comments section below!