You are here: Home / Candy Crush / Is Farm Heroes the Next Candy Crush?

Tommy Palm, gaming guru for King Digital Entertainment, has a problem on his hands. How do you guide a company like King, whose meteoric rise to the top of the charts has recently tapered off into a drooping IPO? It’s common knowledge that King’s revenue stream is based almost entirely around Candy Crush. If they can’t come up with dynamic new ideas for games, King will be an outdated relic inside of a year.

While King attempts to make inroads in Asia by promoting Candy Crush, they’re hopeful that Western audiences will migrate to another of their games: Farm Heroes Saga. Palm spoke to Mobile Entertainment recently at King’s pop-up farm in London, which promotes both urban farming and the company’s “#BeAFarmHero” campaign, hawking Farm Heroes as a “significantly different” game than Candy Crush. 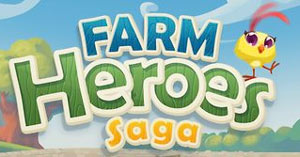 If you laughed at that, you’re not alone. Farm Heroes operates exactly like Candy Crush in the fundamentals of its gameplay. The differences between the two games lie in strategy, since boosters don’t behave in exactly the same way. However, to their credit, King is more generous with free boosters in Farm Heroes than Candy Crush.

Still, Palm was nothing if not candid with the press. King will continue producing match-three puzzle games far into the future, Palm said, “because that’s what we’re good at.” On one level, it’s good that King recognizes a good thing when they see it. They clearly did something right to tap into a cultural niche in the way they have. But it’s worth considering how long King’s audiences will be content to play games that are basically the same rehashed concept. Sooner or later, millions of dedicated Candy Crushers will be hungry for a game that pushes the envelope. Is Farm Heroes really going to be an adequate response? Tell us what you think in the comments.