It’s hard to imagine now, but King Digital Entertainment wasn’t always a juggernaut in the gaming industry. Back in 2003, it was a humble little start-up that published casual games solely on its Web site, with no aspirations toward Facebook integration or even mobile apps. At that point, co-founder Toby Rowland was content to slowly build up his brainchild and see where it could go. But in 2011, Rowland chose to leave King and sell his stake in the company for $3.1 million US. We may never know exactly why Rowland chose to leave, but it’s safe to say he’s kicking himself for doing so now that his share of King is worth close to a billion dollars.

But all the money in the world can’t compare to doing what you truly love for a living, so we’d like to think that Rowland is happy nevertheless. What is his new project, you may ask? Well, it’s not what you might expect. After leaving King, Rowland founded the educational website MangaHigh.com, where he currently serves as the company’s CEO. MangaHigh takes a unique perspective to teaching mathematics to grade school students by incorporating traditional lesson plans into a series of engaging web-based video games. 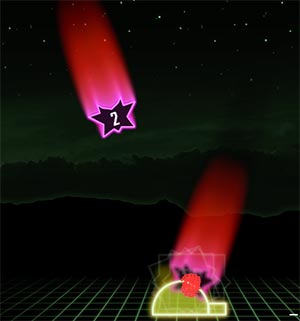 The idea of using games to teach kids unappealing topics is certainly nothing new–anyone who has ever played the Oregon Trail or Math Blaster series of games as a child can attest to this fact. But MangaHigh’s line of games is diverse enough to keep kids interested across a huge range of topics, from shapes and basic algebra to complex data and algorithms. The games are genuinely fun, too–even the super easy ones that teach addition and subtraction are brightly colored and involve ice cream (the punnily named Sundae Times), and others are genuinely action-packed, like Sigma Prime (above), in which you must defend the Earth from invaders by using ballistic factorials.

It’s a far cry from Candy Crush, and certainly not as lucrative, but we’re confident that MangaHigh is Rowland’s way of doing what he loves while making a difference in kids’ lives. These games might not be NP-hard, but they’re more than enough for the students they teach. Hopefully Rowland will make more than enough money from this venture to make his early departure from King worthwhile.

For more on this exciting development, read Jacob Aron’s article on New Scientist.