Soda Level 545 Cheat #1: Focus on Popping the Bottles on the Edges First 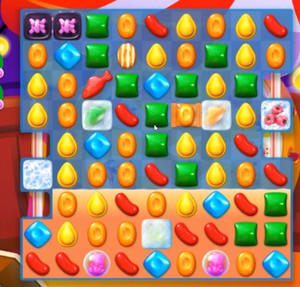 Candy Crush Soda Saga Level 545’s first stage has four bottles which you need to pop to raise the acid levels before you move to the next stage. Two of these bottles will be in the middle column and two of them on the far ends, one on the right and one on the left. Usually, since the once on the edges are surrounded by fewer candies, they will be more troublesome to pop. Therefore, focus on them first, and work on the easier ones later.

Candy Crush Soda Saga Level 545’s goal is about the bears. Therefore, try not to use too many moves on the bottles on stage one. You need as many moves as possible in stage two since you will have loads of ice to crack.

Candy Crush Soda Saga Level 545’s first stage is mainly about popping those bottles to raise the acid levels. Only the ones on the edges can be problematic. Once you’ve popped those, you are likely to have an easy time. While you are popping those bottles, you will have plenty of chances to make special candies.

In Candy Crush Soda Saga Level 545, special candies you make in the first stage will still be available for use in the second stage. If you make a special candy in stage one, and you don’t need it, save it for stage 2. If you have two special candies near each other, avoid activating one in a way that will waste the other. Save them for stage two where they will be very useful breaking ice.

Soda Level 545 Cheat #3: Pop the Bottles Before you free the Bears

Candy Crush Soda Saga Level 545s stage two is where you are faced with the challenge of cracking ice to release the bears. The bear in the middle of the board is easiest to find, but you should not make the mistake of releasing the bear before you pop at least one bottle. Releasing the bear before you pop a bottle will take you right back to the first stage. To avoid that, place your focus first on the bottles rather than the bears. While you pop the bottles, you will most likely be cracking some ice too. Just make sure its not the ice in the middle, lest you let that bear go too soon. Once you have popped at least one bottle, you can shift your focus back to the bears.

Are you more of a visual learner? Watch this gameplay video for Candy Crush Soda Level 545 to help you beat the level. Notice the different strategies this player uses to improve your Candy Crush Saga game.