Inside the Legion of Female Fans

It’s no secret that Candy Crush is a worldwide gaming phenomenon without peer–just ask any of its 57 million daily players on Facebook. And we’ve long suspected that the game is especially popular among the older female population, but to be honest, that’s mostly because we get extra life requests from our mothers and their friends more often than anyone else during the day. But as it turns out, women really are Candy Crush’s biggest fans, and by no small margin either.

According to the Daily Mail, women between the ages of 25 and 55 are by far the most loyal demographic among Candy Crush players, a bit of data that can be attributed to a number of factors. For one, women who have to divide their time between childcare and a full-time job are in desperate need of a distraction from the stress that fills their day-to-day lives. Since Candy Crush requires a the player to devote all of his or her attention to the task at hand in order to advance, there’s no room in the conscious mind for thoughts of other commitments or stressors, leading to a period of calm for even the most frantic worker. It also doesn’t hurt that the game’s visuals and soundtrack are exceptionally soothing, inducing happiness and relaxation all by themselves. 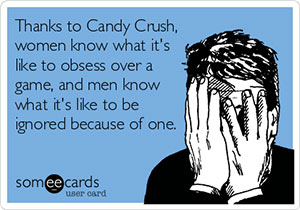 But all these are factors that can get someone hooked, no matter what age group or gender identity they associate themselves with. According to Professor Mark Griffiths, director of the International Gaming Research Unit,

“Candy Crush is one of those gender-neutral games….Unlike so many online games, it doesn’t involve killing, fighting or strong male characters or highly sexualized female characters.” Source: The Daily Mail

Taking a look at the state of video games as a whole, it’s virtually impossible not to see Prof. Griffiths’ point. The vast majority of games made since the 1980s either involve ultraviolent action or impossible standards of female sexuality, usually both. Those that avoid these unfortunate tropes are generally given little to no attention by the male-centric industry. One 23-year-old London resident told the Arab News that she enjoyed Candy Crush, but emphatically stated that she was “not a gamer.” Candy Crush and similarly designed casual games may be a huge step toward the democratization of modern gaming.