Level 1092 Cheat #1: Create special candies on the two bigger sections of the board 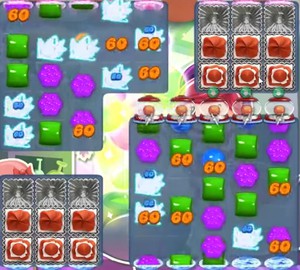 First, figure out the way the candies moves in Candy Crush Level 1092 and this will become simple for you. The exits at this level are at the bottom of the top right section on the playing field, and the fruit has to travel through different sections of the board to get to the exits. To get rid of the cream blockers from the other sections on the playing field, you will have to create special candies and combinations in the two bigger sections of the board.

Avoid making moves in the two columns on the right of the top left section of the playing field on move 31 and 41 because this is when the ingredients fall. The fruit will be stuck on the ledge in Candy Crush Level 1092 if it comes out of either of those two dispensers meaning that you will have to move it over.

Level 1092 Cheat #2: Clear all icing from the playing field

Are you more of a visual learner? Watch this gameplay video for Candy Crush level 1092 to help you beat the level. Notice the different strategies this player uses to improve your Candy Crush Saga game.