Level 239 Cheat #1: Use the least moves to open the board 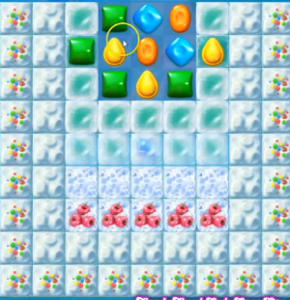 The space to match candies in Candy Crush Soda level 239 is very small while a bigger portion of the playing board is entirely covered with ice cubes, highlighting the fact that this level is of medium difficulty. You must find a way of creating more space to match the candies and clear the obstacles to reveal and release the nine bears using the least possible moves.
Starting from the little space at the top part, start matching, and spread all over the board, striving to utilize the least number of moves. Bear in mind that you have 40 moves to eliminate the ice cubes and release the bears, thus you must be wise to use all the opportunities including creating and using special candies.
Obviously, Candy Crush Soda level 239 is played from the top, and with every move, think about the next move so as to use the least moves too.

In level 239 of Candy Crush Soda Saga, you will meet arguably all types of obstacles ranging from one-layered ice cube barrier to a six-layered ice cube barrier. Clearing each of them is not as easy as it might look and it might take a large percentage of the 40 moves allocated.
Similar to the previous levels, the best way to weaken these ice cube obstacles is matching the candies as adjacent to them as possible. The strategy presents the benefits of weakening the snow and saving the few moves instead of carelessly matching candies in the already-cleared regions.
When you have special candies near the barriers, the possibility of opening up a larger portion of the board is immense.

By now, you must have cleared a sizeable portion of the ice cube barriers and probably used up a lot of the maximum moves but yet to release all the nine bears. Matching candies that are adjacent to the snow can eventually beat this level albeit there are many opportunities to create cascade combo. You might be tempted to combine the coloring candies trapped in the snow and the special candies for a powerful clearance. The decision can be beneficial if you have more moves and adequate time to clear the snow barrier. However, it is a move worthy at this instance as it will ease the whole task of hitting the target as well as the undesirable dark-blue candies. You can find the nine bears of Candy Crush Soda level 239 with some moves to spare.